The Great War's Influence on Later Writers and on Contemporary Literature 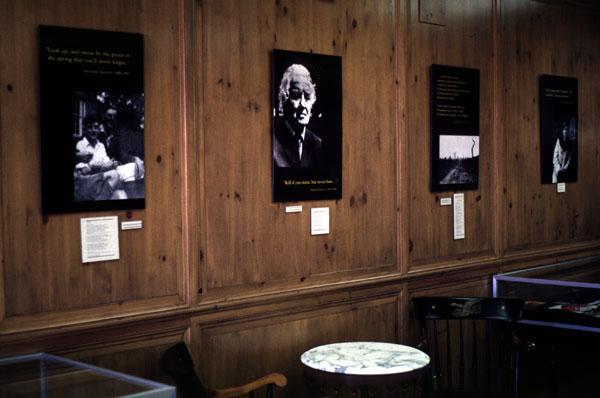 
Poets of the Second World War were naturally influenced by their predecessors in the First. The post-war generation grew up hearing and reading about the Great War (for the full, classic treatment on these understatements, see Fussell, The Great War and Modern Memory).

Keith Douglas (1920-1944), a tanker, fought in North Africa and at the D-Day Invasion at Normandy, where he was killed on June 9. Douglas was also a student of Edmund Blunden at Merton College before he became a soldier, and arguably the greatest poet, in the Second World War. Douglas wrote that "the behavior of the living and the appearance of the dead were so accurately described by the poets of the Great War that every day on the battlefields of the western desert . . . their poems are illustrated" (Fussell 319). In his poem "Desert Flowers" Douglas remarks that he is only repeating what Isaac Rosenberg has already said. (See also the poem Sportsmen" -- and its slight variation, entitled "Aristocrats" -- wherein Douglas laments the "gentle/obsolescent breed of heroes" held over from the Great War.)

It's easy to understand why Welsh poet Alun Lewis (1915-1944) a soldier in the Second World War, should appreciate Great War poet Edward Thomas. Thomas' direct, unadorned language, and keen eye for detail have helped his reputation to grow steadily since the great war. Lewis' sympathetic poem "To Edward Thomas" appreciates the simple, yet at times impoverished life of Edward Thomas, while it celebrates his talent and laments his loss.


Brigham Young University was fortunate to have on its English faculty one of the greatest poets of the late 20th Century, and one of the greatest of all Welsh poets: Leslie Norris (1921-2006). In addition to being a gifted poet, Professor Norris (a veteran of the Second World War) was also an expert in Great War literature, and an appreciator of Edward Thomas--who was the subject of two of Norris' poems.

Leslie Norris also interviewed Robert Graves in 1970 for The Listener:

(Click here to see the article) Norris, Leslie. "Where the crakeberries grow -- Robert Graves gives an account of himself to Leslie Norris." The Listener 28 May 1970: 715-716.

For more information on Leslie Norris, including critical studies of his poetry about Edward Thomas, click here to enter the Leslie Norris Critical Bibliography.


Other contemporary British poets have written about the Great War, for example:

Philip Larkin (1922-1985) recalled that prelapsarian summer of 1914 (although he had never actually experienced it -- so strong is the myth of the Great War in our modern memory) in "MCMXIV" ("1914"). Martin Stephen used the last line of Larkin's poem, as the title for his 1988 anthology: Never Such Innocence: A New Anthology of Great War Verse.

When Vernon Scannell (b. 1922), a veteran of the Second World War, thinks back on war, it is "The Great War" that comes to mind.

Roger McGough (b. 1937) mocks the attitude that sent young men to the slaughter of the Western Front in "A Square Dance."


Vietnam Veteran and contemporary American poet, R. L. Barth invokes the spectres of Owen, Blunden, and Sassoon, in his poem "A Letter to the Dead." 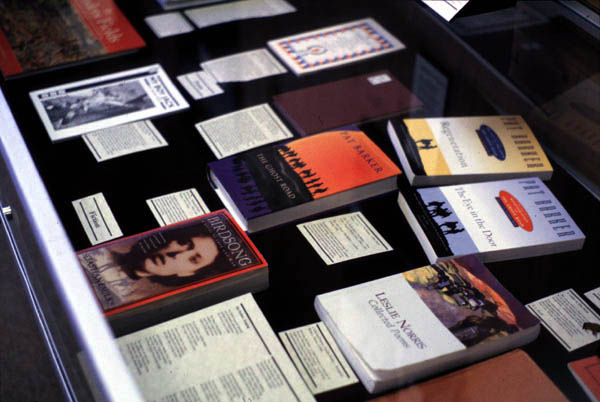 A gripping story of war under the trenches, in the troglodyte world of the tunnels. A truly remarkable book: Faulks reaches back 80 years and tells the nightmarish story of the Somme and Passchendaele with the same uncanny understanding that Stephen Crane had as he looked back and wrote The Red Badge of Courage 30 years after the American Civil War. Faulks' character development, attention to detail, and gripping descriptions of battle combine to make Birdsong a masterpiece on a par with Michael Shaara's Killer Angels.

Pat Barker's acclaimed Regeneration trilogy of soldier's-suffering, civilian paranoia, and the treatment of shell-shock. Characters (including Wilfred Owen) and sub-plots revolve around the central theme of the doctor-patient relationship between the Freudian pyschologist W.H.R. Rivers and Siegfried Sassoon. (See also Criaglockhart Hospital.)

Stephen MacDonald in Not About Heroes dramatizes the meeting and friendship of Siegfried Sassoon and Wilfred Owen at Craiglockhart War Hospital (where both men were patients). Suffering from shell-shock, Owen arrived at Craiglockhart on June 26, 1917. Siegfried Sassoon arrived in late July. Wounded earlier that year, Sassoon had been sent to Craiglockhart (under the ruse of being shell-shocked) in lieu of being court martialed for going AWOL after making his famous protest statement against the war. Owen introduced himself to Sassoon around the 17th of August, and the two men became friends and critics of each others' poetry. Sassoon had a profound effect on Owen's work through his poetic mentoring, and by introducing Owen to his London literary connections. Sassoon also collected and edited the first edition of Owen's work brought out in 1920.

Because of the annihilation of the Ulster Division at the Battle of the Somme, July 1st "is still a day of deep mourning in Ulster" (Fussell 316). July 1st, 1916, the first day of the Battle of the Somme, was, coincidentally, also the anniversary of the Battle of Boyne in 1690, when the forces of William III defeated the Roman Catholic James II. Therefore, as Keith Jeffery remarked in The Times Literary Supplement, the Somme . . . "has, like the Boyne, come to have a sacred place in the Loyalist Protestant mind. It marks the Union sealed with blood. It stands for the ultimate test of Ulster's loyalty; a blood-sacrifice to match any made by Irish nationalists" (back cover of Observe the Sons of Ulster Marching Towards the Somme). A story for anyone wishing to better understand the history of and current state of affairs in Northern Ireland.

Also, a story of the tragedy that befell many regional units and "Pal's Battalions" which were formed up from members of the same villages, towns and neighborhoods. These same villages, towns and neighborhoods were then devastated when their young men were slaughtered together in the major battles on the Western Front (see also Michael Forman's War Game). Similar tragedies happened to regional units in the American Civil War, and to U.S. National Guard units in World War I and II.

(Copy on loan to the HBLL)

David Haig's My Boy Jack dramatizes the story of Rudyard Kipling's only son, John, who was killed in the Great War. Believing in the war, and in its expected brevity, Kipling (1865-1936) used his influence to secure for his teenage son John, who was almost legally-blind from near-sightedness, a commission in the Irish Guards. Tragically, John was wounded in the Autumn of 1915 and simply disappeared; he went Missing-in-Action for two years before his death was finally confirmed. (In memory of his son, Kipling later wrote a history, The Irish Guards in the Great War / edited and compiled from their diaries and papers, by Rudyard Kipling. -- London : Macmillan and Co., Limited, 1923.)

On a related (and also sad), and ironic note, Kipling had before the war contributed to a compilation of light-hearted, humorous news stories about the Boer War in South Africa:

The Boer War (1899-1902), fought in South Africa, far from England by the small, professional British Army -- the regulars -- obviously didn't effect the English psyche in the way the Great War did, which drew out and sacrificed men and boys from all classes of British society. Kipling wasn't the only popular writer who contributed to War's Brighter Side, Arthur Conan Doyle also added a few pieces. And just as Kipling would, Arthur Conan Doyle would later lose a son in the Great War -- and a brother, and a brother-in-law. "The creator of Sherlock Holmes, the ultimate rationalist" became a "tireless missionary for the cause of spiritualism," and a believer in seances for contacting his dead son, Kingsley (Winter and Baggett, 382, 384-85, 387). The most popular performer of the day, singer and comic Harry Lauder, also lost a son in the war. And even Prime Mister Harold Asquith lost a son in the Great War, Raymond, killed during the Battle of the Somme in 1916. After his son's death, Asquith didn't have much enthusiasm for the war (Winter and Baggett, 188), and later that year failed in his bid for re-election, and Lloyd George became Prime Minster. The Prince of Wales -- later to become King Edward VIII (1894-1972) -- was a contemporary of the war poets. The Prince served from 1914-1918 as an aide to General Sir John French who commanded the BEF for the first 16 months of the war, before losing his command to Sir Douglas Haig in December 1915. The Prince of Wales was not the only member of the Royal Family to serve in the war, the Prince's younger brother, the Duke of York -- later to become King George VI (1895-1952) -- served in the Royal Navy and fought in the Battle of Jutland (1916).