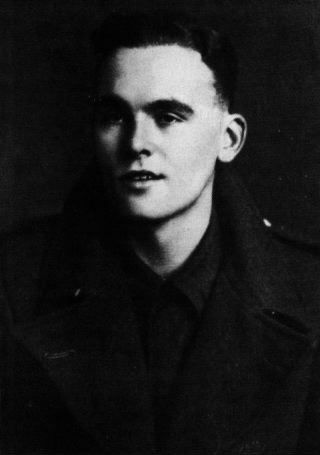 (On visiting the memorial stone above Steep in Hampshire)

On the way up from Sheet I met some children
Filling a pram with brushwood; higher still
Beside Steep church an old man pointed out
A rough white stone upon a flinty spur
Projecting from the high autumnal woods...
I doubt if much has changed since you came here
On your last leave; except the stone; it bears
Your name and trade: 'To Edward Thomas, Poet.'

Climbing the steep path through the copse I knew
My cares weighed heavily as yours, my gift
Much less, my hope
No more than yours.
And like you I felt sensitive and somehow apart,
Lonely and exalted by the friendship of the wind
And the placid afternoon enfolding
The dangerous future and the smile.

I sat and watched the dusky berried ridge
Of yew-trees, deepened by oblique dark shafts,
Throw back the flame of red and gold and russet
That leapt from beech and ash to birch and chestnut
Along the downward arc of the hill's shoulder,
And sunlight with discerning fingers
Softly explore the distant wooded acres,
Touching the farmsteads one by one with lightness
Until it reached the Downs, whose soft green pastures
Went slanting sea- and skywards to the limits
Where sight surrenders and the mind alone
Can find the sheeps' tracks and the grazing.

And for the moment Life appeared
As gentle as the view I gazed upon.

Later, a whole day later, I remembered
This war and yours and your weary
Circle of failure and your striving
To make articulate the groping voices
Of snow and rain and dripping branches
And love that ailing in itself cried out
About the straggling eaves and ringed the candle
With shadows slouching round your buried head;
And in the lonely house there was no ease
For you, or Helen, or those small perplexed
Children of yours who only wished to please.

Divining this, I knew the voice that called you
Was soft and neutral as the sky
Breathing on the grey horizon, stronger
Than night's immediate grasp, the limbs of mercy
Oblivious as the blood; and growing clearer,
More urgent as all else dissolved away,
--Projected books, half-thoughts, the children's birthdays,
And wedding anniversaries as cold
As dates in history--the dream
Emerging from the fact that folds a dream,
The endless rides of stormy-branched dark
Whose fibres are a thread within the hand--

Till suddenly, at Arras*, you possessed that hinted land.