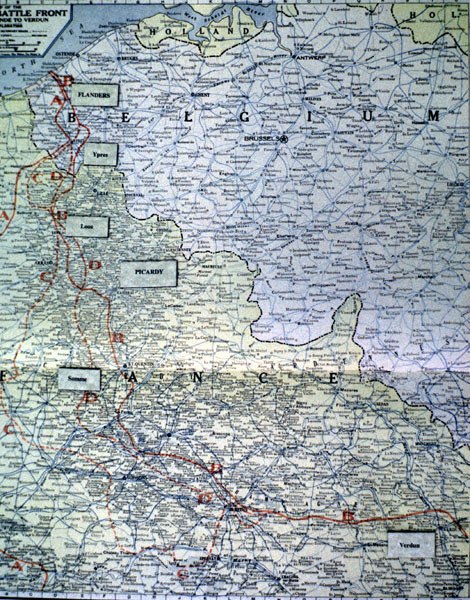 After the first months of the war (August- September, 1914), when the German advance toward Paris had been stopped, the opposing forces settled into defensive positions which eventually grew into the complex system of trenches that characterize the Western Front. Trying to outflank each others' positions, the trench system grew until it stretched from the Belgian coast to the Swiss border. A line some 400 miles long. Henri Barbusse, the author of Le Feu (1916) (translated into English as Under Fire: The Story of a Squad), estimated that there were 6250 miles of trenches in the French sector alone. Paul Fussell has performed some arithmetic to include the British sector, and the Central Powers of German and Austria, and has arrived at 25,000 miles of trenches on the Western Front – equal to a trench around the Equator.

The trenches were rat-infested, cold, and in Flanders filled with water (see Ypres). The ground between the enemy trenches – 50 to 500 yards – blasted treeless, shell-cratered, laced with barbed wire, and littered with unburied dead, was No-Man's Land. 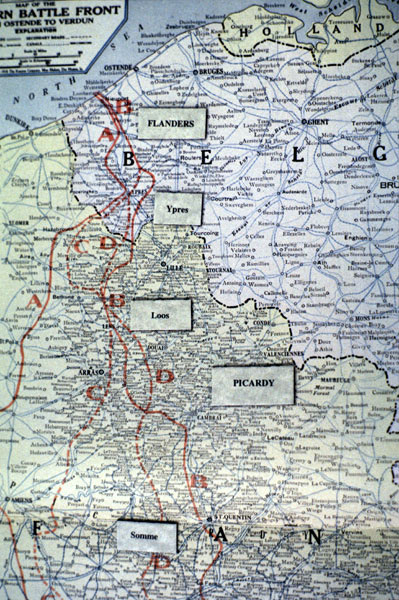 This map comes from an atlas of the time: An Atlas of the World War, Showing Latest Maps and Pictures / Des Moines : The Kenyon Co., 1918. The red lines delineate the limits of various German advances, with the line of prolonged trench warfare being somewhere between lines "C" and "D." Some of the important sectors on the Western Front included (moving from SE diagonally NW):

Verdun in France – including the surrounding strongholds and fortresses, Douaumont, Vaux, etc.

The Somme in the French province of Picardy – including, among others, the villages of Bapaume, Fricourt, Thiepval, and Beaumont Hamel, and several "woods" including High Wood, Mametz Wood, and Trones.

Ypres in the Belgian province of Flanders – including the Messines Ridge, and the village of Passchendaele.