Not counting the week-long preparatory bombardment, and the enormous mines that were set off under the German lines 10 minutes before the assault proper, the Battle of the Somme began precisely at 7:30am on a beautiful, sunny July 1st, 1916. At that moment the British troops crawled out of their trenches, and formed into orderly ranks to march across "No-Man's Land" and occupy the deserted German trenches (the artillery bombardment would have cut the barbed wire and killed the defenders). One Captain Nevill had given each of his platoons a soccer ball to kick-off as the attack began. It would be a grand "walk-over." That was the plan. In reality, men were killed instantly before they could even climb out of their trenches, Captain Nevill was one of them. The air was filled with flying metal. The Germans had survived the preparatory bombardment, and were manning their machine guns and artillery. Wave after wave of British soldiers were slaughtered, mowed down as they bunched up against the uncut wire. On that first day of the battle (which — it's almost impossible to imagine — would go on for four months) the British Army suffered almost 60,000 casualties, over 20,000 dead. A record. 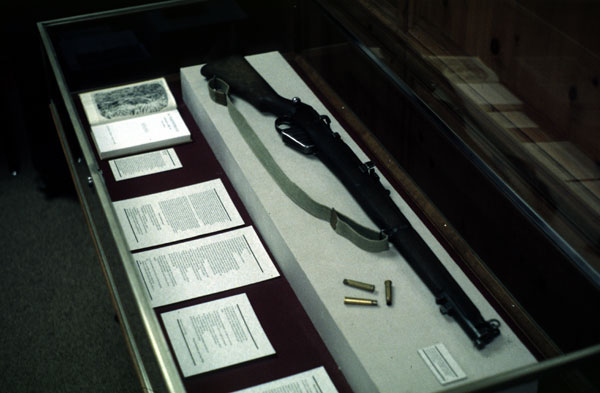 In the climax of David Jones' epic prose-poem In Parenthesis, the protagonist John Ball attacks Mametz Wood, along with his unit, on the morning of the first day of the Battle of the Somme, July 1, 1916. As he goes forward, he watches as most of his fellows around him are ripped apart, but Ball somehow makes it through unscathed until that evening. When ordered to take part in a subsequent, follow-up attack, Ball is knocked down, hit in the legs by machinegun fire, and begins his long crawl back. Along the way he discards most of his equipment (except for his gas mask, which he thinks might come in handy). However, his rifle has special meaning: as any soldier knows, a warrior and his weapon are one: it defines who he is, lose it and he loses his identity. As he retreats, Ball carries on a conversation with himself: should he leave the rifle? He hears the voices of his drill instructors driving home the importance of care of arms, the individuality of each soldier's weapon, the intimacy that he should share with it. In Chanson de Roland, mortally wounded Roland tries to break his sword Durendal against a stone, but cannot, so instead tucks it under his body and dies. So at last, John Ball relinquishes the symbol of his soldierly identity, his rifle, and must "leave it—under the oak."

From In Parenthesis, part 7

And to Private Ball it came as if a rigid beam of great weight
flailed about his calves, caught from behind by ballista-baulk
let fly or aft-beam slewed to clout gunnel-walker
below below below.
When golden vanities make about,
you've got no legs to stand on.
He thought it disproportionate in its violence considering
the fragility of us.
The warm fluid percolates between his toes and his left boot
fills, as when you tread in a puddle--he crawled away in the
opposite direction.

It's difficult with the weight of the rifle.
Leave it--under the oak.
Leave it for a salvage-bloke
let it lie bruised for a monument
dispense the authenticated fragments to the faithful.
It's the thunder-besom for us
it's the bright bough borne
it's the tensioned yew for a Genoese jammed arbalest and a
scarlet square for a mounted mareschal, it's that county-mob
back to back. Majuba mountain and Mons Cherubim and
spreaded mats for Sydney Street East, and come to Bisley
for a Silver Dish. It's R.SM. O'Grady says, it's the soldier's
best friend if you care for the working parts and let us be 'av-
ing those springs released smartly in Company billets on wet
forenoons and clickerty-click and one up the spout and you
men must really cultivate the habit of treating this weapon with
the very greatest care and there should be a healthy rivalry
among you--it should be a matter of very proper pride and
Marry it man! Marry it!
Cherish her, she's your very own.
Coax it man coax it--it's delicately and ingeniously made
--it's an instrument of precision--it costs us tax-payers,
money-I want you men to remember that.
Fondle it like a granny--talk to it--consider it as you would
a friendöand when you ground these arms she's not a rooky's
gas-pipe for greenhorns to tarnish.
You've known her hot and cold.
You would choose her from among many.
You know her by her bias, and by her exact error at 300, and
by the deep scar at the small, by the fair flaw in the grain,
above the lower sling-swivel--
but leave it under the oak.

Slung so, it swings its full weight, With you going blindly on
all paws, it slews its whole length, to hang at your bowed neck
like the Mariner's white oblation.
You drag past the four bright stones at the turn of Wood
Support.

It is not to be broken on the brown stone under the gracious
tree.
It is not to be hidden under your failing body.
Slung so, it troubles your painful crawling like a fugitive's
irons.

At the gate of the wood you try a last adjustment, but slung
so, it's an impediment, it's of detriment to your hopes, you
had best be rid of it--the sagging webbing and all and what's
left of your two fifty--but it were wise to hold on to your
mask.

You're clumsy in your feebleness, you implicate your tin-hat
rim with the slack sling of it.
Let it lie for the dews to rust it, or ought you to decently
cover the working parts.
Its dark barrel, where you leave it under the oak, reflects
the solemn star that rises urgently from Cliff Trench.
It's a beautiful doll for us
it's the Last Reputable Arm.
But leave it--under the oak.
Leave it for a Cook's tourist to the Devastated Areas and crawl
as far as you can and wait for the bearers.