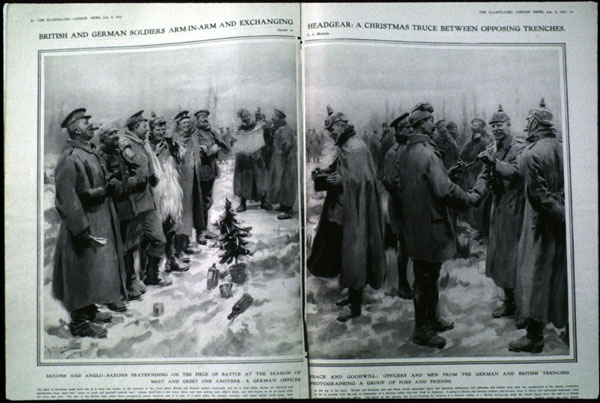 The text below the illustration reads:

BRITISH AND GERMAN SOLDIERS ARM-IN-ARM AND EXCHANGING HEADGEAR: A CHRISTMAS TRUCE BETWEEN OPPOSING TRENCHES.
DRAWN BY A. C. MICHAEL

SAXONS AND ANGLO-SAXONS FRATERNISING ON THE FIELD OF BATTLE AT THE SEASON OF PEACE AND GOODWILL: OFFICERS AND MEN FROM THE GERMAN AND BRITISH TRENCHES MEET AND GREET ONE ANOTHER - A GERMAN OFFICER PHOTOGRAPHING A GROUP OF FOES AND FRIENDS.

The spirit of Christmas made itself felt in at least one section of the trenches at the front, where British and German soldiers fraternised, and for a brief while, during an informal and spontaneous truce, there was "peace on earth and goodwill towards men" among those who a few hours before had been seeking each other's blood, and were bound to do so again after the truce was over. The part of the British lines where these incongruous scenes occurred, was, it is said, at a point where the enemy's trenches, only about eighty yards away, were occupied by a Saxon regiment. Further along the line, where Prussian troops were said to be stationed, there was a certain amount of fighting. It was apparently towards the British left that the friendly truce was observed, while officers and men from both sides left their trenches and met in No Man's Land between, where, as a rule, no man dares to show so much as the top of his head. British and Germans met and shook hands, exchanged cigars and cigarettes, newspapers and addresses, and wished each other the compliments of the season, conversing as far as possible with the aid, as interpreter, of a German soldier who had lived in America. A group of British and German soldiers, arm-in-arm, some of whom had exchanged head-gear, were photographed by a German officer. The figure on the extreme left in our drawing, for instance, is a German soldier in a British service-cap, while the fourth figure from the left is a British soldier in his goat-skin coat wearing a Pickelhaube, or German helmet. Some of the British, it is said visited the German trenches and an Anglo-German football match was even played. The dead who lay in front of the trenches were buried, and a party of Germans brought back the body of a British officer.- [Drawing Copyrighted in United States and Canada.]