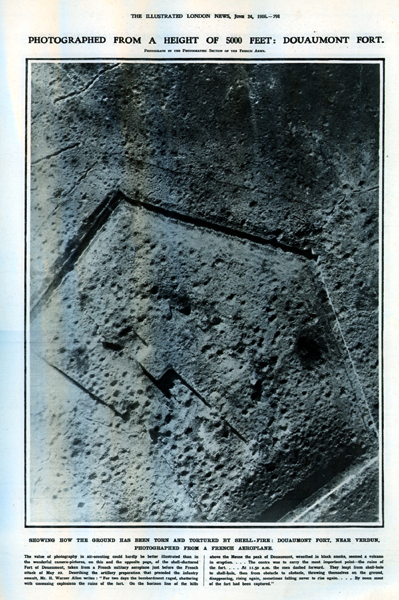 PHOTOGRAPHED FROM A HEIGHT OF 5000 FEET: DOUAUMONT FORT.
PHOTOGRAPH BY THE PHOTOGRAPHIC SECTION OF THE FRENCH ARMY.

SHOWING HOW THE GROUND HAS BEEN TORN AND TORTURED BY SHELL-FIRE: DOUAUMONT FORT, NEAR VERDUN, PHOTOGRAPHED FROM A FRENCH AEROPLANE.

The value of photography in air-scouting could hardly by better illustrated than in the wonderful camera-pictures, on this and the opposite page, of the shell-shattered Fort of Douaumont, taken from a French military aeroplane just before the French attack of May 22. Describing the artillery preparation that preceded the infantry assault, Mr. H. Warner Allen writes: "For two days the bombardment raged, shattering with unceasing explosions the ruins of the fort. On the horizon line of the hills above the Meuse the peak of Douaumont, wreathed in black smoke, seemed a volcano in eruption . . . The centre was to carry the most important point - the ruins of the fort . . . At 11.50 a.m. the men dashed forward. They leapt from shell-hole to shell-hole, then from obstacle to obstacle, throwing themselves on the ground, disappearing, rising again, sometimes falling never to rise again . . . By noon most of the fort had been captured."