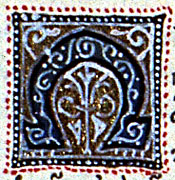 Aldus began his professional career as a teacher, not as a printer, and as such saw a need for the publication of the Greek and Latin classical authors, whose works figured high in the Renaissance humanist agenda. While many of these works--particularly those of Latin authors and translations of those by Greek authors--had been published by the end of the fifteenth century, a large number had not yet seen print. This lack was especially acute in the case of Greek authors, and when Aldus decided to begin a printing business these authors were the ones he emphasized. His development of greek and italic fonts and the octavo format point toward a carefully planned program for the dissemination of the ancient classics.

Under Aldus's program, works of numerous Greek and Latin authors were published for the first time, and works by others appeared in better editions than had previously been available. Some highlights of the Greek publications during the first two decades of the press are the works of Aristotle, Thucydides, Herodotus, Sophocles, Euripides, Theocritus, Homer and Hesiod; Latin authors published include Virgil, Horace, Juvenal, Persius, Martial, Cicero, Ovid, Catullus, and Pliny--in short, the foundation of the Greek and Latin classics.