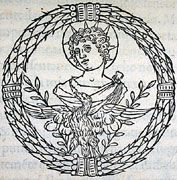 In aedibus Aldi--Aldus & Co. This formula, used in so many of the books printed by Aldus Manutius, and in modified form in those of his successors, became synonymous with elegance and quality in sixteenth-century book production. In celebration of the founding of the Aldine Press exactly five hundred years ago a selection of the Harold B. Lee Library's Aldine holdings is being exhibited here.

The Brigham Young University's Harold B. Lee Library began earnestly collecting books produced by the Aldine Press with the acquisition of the Marco Heidner collection. This collection of approximately 500 fifteenth- and sixteenth-century books was acquired in 1966 to support the strong interest of the university and that of its sponsoring institution, The Church of Jesus Christ of Latter-day Saints, in the period of the Protestant Reformation and the Renaissance, and became the foundation of the library's fine collection of early printed books.

The library currently holds just over 500 titles produced by the Aldine Press. In addition, the library has collected books published by the press's agents in Paris, a selection of the "Lyon forgeries" (unauthorized reproductions of Aldine publications produced in Lyon, France, during the lifetime of Aldus the Elder), as well as a fair number of other sixteenth-century imitations. This represents one of the finest collections of Aldine and related books in North America.

The exhibit is arranged thematically. First a few of the more noteworthy books produced by the press are highlighted (Intro); then books outlining the development of Aldus the Elder's program to promote Greek and Latin classics (Greek and Latin); the press's publication of contemporary humanist authors (Humanist); the work of the press under Paulus as official printer to the Roman Catholic Church (Rome); the writings of the three Manutii as published by their own press (Manutii); and finally a selection of books connected by Aldine interest in New World exploration (New World). There follows a complete checklist of the Aldine holdings of the Harold B. Lee Library (Checklist).