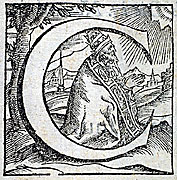 Works for and at Rome

In 1533 Paulus Manutius undertook the conduct of his father's business. During the years since his father's death in 1515 the operations of the press had been much neglected by his uncles, the Torresani. These had continued to publish books for the press, but their publications did not exhibit the scholarly perfection which had always distinguished the works of Aldus. Determined to restore the glory of the Aldine Press, Paulus separated from his uncles in 1540 and assumed full management of the press. Paulus was able to restore the reputation of the Aldine Press through the high quality of his scholarship and subsequent publications. However, in spite of scholarly and typographic excellence, works published under Paulus generally suffered from slow sales. In view of waning commercial prosperity and the constant wars in northern Italy, the prospect of printing in Rome must have had some appeal to Paulus.

In 1561 Paulus accepted an invitation from Pope Pius IV to come to Rome and take charge there of the publication of the writings of the early church fathers and of such other works as might be deemed appropriate by the Vatican. In the wake of the increasing influence of the publications of the German heretics, the Catholic church recognized the value of the printing press. Protestant publications, having already undermined the authority of the church in Germany, Switzerland and France, were now making inroads into Italy itself. The church countered quickly, using the famous and widely respected name of the Aldine Press under the management of Paulus.