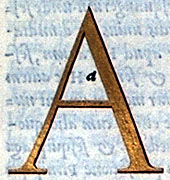 It is no surprise that Aldus Manutius--himself a scholar of Latin and Greek who apparently received a humanist education, and who was the admirer and friend of both scholars and poets--should have taken up the publication of humanist authors right from the beginning of his career. He and his successors produced a steady stream of works not only by contemporaries such as Pietro Bembo and Erasmus, but by humanists of earlier generations, including the already "classic" work of Dante, Petrarch, and Boccaccio. This output came nowhere near the number of ancient texts published; but nevertheless, the variety of humanist works put forth by the Aldine Press is considerable. It includes strictly scholarly work such as translations, editions, commentaries, and erudite treatises, as well as more polemical and oratorical works of topical interest and, finally, poetry and prose in the vernacular. In their variety these publications reflect, especially in the early years, the importance of the Aldine Press as a gathering place for humanists of all nations and its even greater importance as a disseminator of humanism from Italy to northern and eastern Europe, as well as the means by which the work of northern humanists could be introduced into Italy.