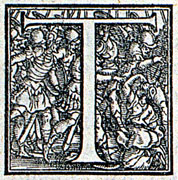 The lifetime of the Aldine Press coincided not only with the apex of the Renaissance revival of learning but with the first great European expansion beyond the continent. Nowhere were the new discoveries more dramatic and exciting than in the realm of oceanic exploration and the colonization of the Western Hemisphere.

The stimulus of the early voyages led to a growth of knowledge on an unparalleled scale. Humankind gained a vast comprehension of the earth itself, while such fields as botany, zoology, geology, chemistry, and medicine were vastly enlarged by the knowledge of newly found plants, animals, and other natural products. The great presses of the day were at the center of the intellectual revival: the Manutii in Italy, the Frobens in Basel, and the Estiennes in Paris all committed to print what this age of discovery had uncovered.

Representing this period in the present exhibit are a few of treatises published by the Aldine Press reflective of the excitement of discovery which was in the air. Contemporary scholars, poets and general public alike saw in the early explorers an extension of the spirit of the times. The Aldine Press captured much of this spirit, serving as a barometer in monitoring the happenings and concerns, the problems and preoccupations, the hopes and despairs of its age. Its publications reflect the excitement and interests of the sixteenth century in the discoveries of the dayčnew vistas on the intellectual horizon as well as on the physical globe.